How to Teach Your FAMILY Intuitive Eating 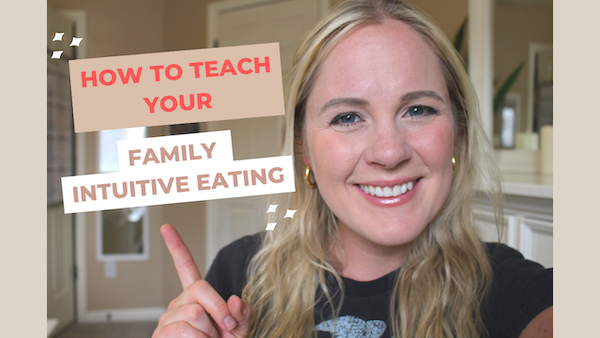 It is said that if we just leave kids to eat whatever they want, they will just eat “junk food” ALL DAY. So how can intuitive eating really work for our kids?

I’m going to teach you my simple go-to system for helping your kids be more intuitive with their food. Plus some body image tips.

I am Laura Cragun and I am an intuitive eating and body image coach. I help Latter-Day Christian women find body acceptance, manage their stress, and discover food freedom so they can have more purpose beyond their bodies.

In this video, we’ll be talking about two things.

Number one, the Logistics of Intuitive Eating for families.

This is going to be my Go-To System, which is The Five Responsibilities that both children and parents have when they are at the dinner table. You have three of them and the kids have two of them.

And then secondly, more of the Mental Side of Intuitive Eating.

We will be talking about your example, the power of your words, and how to deal with the negative influences of diet culture with our kids.

So my Go-To System for Intuitive Eating is this golden standard called The Five Responsibilities of the Family.

You as the parent have three responsibilities.

You are in charge of WHEN, WHERE and WHAT your children eat.

And for the child, they have two responsibilities: HOW MUCH they will eat, and IF THEY WILL EAT at all.

Of course, this ranges with babies and teenagers. So this is definitely going to be depending on what you decide as a family.

This division of responsibility is seen as the Gold Standard for feeding from a ton of pediatric societies and health authorities.

We want kids to stick to a reliable routine and that will help you as a parent.

Number 2 – is WHERE they will eat. Sometimes they do need that fun, especially if they’re picky eaters, and they need to explore maybe in areas that they feel more comfortable like under the table or outside on the swing, wherever that is. But you decide where with them and you keep that conversation flow.

We’re looking to build that trust and connection. That’s the only way that you’re going to be able to implement more of these principles. So they don’t feel like you’re forcing on a new thing,

I’d also like to add that when you are talking about this with them for the first time, look for ways to introduce it to them, talk about that you’ve started reading something and you would love to share (and maybe start as a family!)

It doesn’t involve any restrictions. It actually gives them more to decide, and it will overall be more healthy for the whole family.

Number 3 is WHAT they will eat. And again, you will be involving them in the creation process of your food.

BONUS TIP: As a simple step towards being healthier, just pick one way to be a little bit more healthy if you wanna stop having so. Process foods. And you wanna have some more whole foods. Just add that one thing in where you’re gonna have some whole wheat bread, rather than some white bread, but there are no restrictions here.

It’s only for the purpose of being healthier and feeling better. And also to maybe have some more fiber, because we know that these outside proven health guidelines will help you.

Also, make it a family-style meal. It’s important for kids to grab things and put them on their own plates. So they can start to make those connections with how much they put on their plate with how much they are hungry and they will know over time. But if you do it for them and always plate their own food, that’s going be hard.

And I would even go a step further to even put a dessert on their plate with all the rest of their food! So they’re not putting morality between different foods. (An example of what we don’t want to do), If they finally get to that point after eating all of, their food and then they would get dessert.

Okay. Now we’re onto the two responsibilities for the Children.

Number 1 is HOW MUCH they will eat.

Like I said before, let them plate themselves and decide.

And when it comes to dessert, putting the dessert on the plate with the rest of your meal, would be the one rule, especially if with kids is to have that one portion of dessert.

I always also like to put a safe food on the table. (A food you KNOW they will eat).

This goes with my son, Emmett. He is a picky eater and I might be having chili and cornbread and a side of salad.

He might not eat the chili or the salad, and he would just eat that cornbread, which is a safe food for him. But as a parent, your siren will go off thinking that’s not good enough for them. “They need protein, they need more substance…” blah, blah, blah, blah, blah.

But if you keep forcing or keep accommodating, they’re never going to fully be intuitive.

He might just fill up on that cornbread that night with maybe a glass of milk and he will be okay over a whole week, their diet rounds out, and they will be healthy.

He will want more Oreos after I’ve only given his portion of Oreos on the table for him, but say, you know, we can have it on the next meal.

Let’s go into the second portion of intuitive eating and that is this whole mindset piece.

We will be talking about your example, the power of your words, and how to battle the negative influence of diet culture with your kids.

But before we start, let me set the stage. There is so much out there that our kids have to battle. There are filters. There is social media. There is toxic perfectionism in the way they think their bodies will grow up to be.

They’re taught early on. And even these kids shows bodies are seen as objects.

A lot of people give them value. Only if their body looks a certain. There are unrealistic beauty standards. And even in the beauty culture, there is a whole part of diet culture within that. This is important for both boys and girls.

And this is not just a girl’s game here. Boys have a lot of things that they need to work with as well as their body image and having to combat all this diet culture out.

So number 1, like I said is your example within this mental piece, how are your kids seeing you treat your own body? What are the things you’re telling yourself and what do they hear

now? You may be feeling some guilt here. And I know I did from here on. Please forgive yourself and move forward. You are learning and now you can go forward and teach them and unlearn some of these past negative habits. This will slowly teach them to respect and to trust their body in what they eat and what they do

And also with the power of words, are you giving them lingo and verbiage every day to help them have more gratitude for their bodies and for the food that they’re eating? add in affirmations for them to say, kids need it simple. So if you can pick something once a week, every day, whatever routine is for you, that they can say is an affirmation that I love my body.

I trust my body. I am more than a body. Any of these things will help. And there are so many options online.

Now number three is the negative influences that they will see and have in their life. We will need to be savvy to know how to help them navigate this since their brain isn’t fully developed to know how to deal with it.

This will definitely start with media use, monitoring how long and what kind of content they are consuming. And also try to have them exposed to different things in this world and diversify what they’re watching.

The important thing is to keep the conversation flowing and be talking with them and not to be controlling in a way, but to talk with them about it and come to a decision.

Another important thing is to talk about puberty and to keep that in the cards even early on in their own ways and stages, they will need.

Another thing is when their feelings are hurt and they have been told that their body isn’t good enough by maybe friends or even adults they need to stand up for themselves in a positive way, or that they can be choosy with those friends and find different friends and also teach that principle of agency that they can’t control what others say, but they can control themselves.

It is all about them and help them find that reflection within themselves and keep that conversation flowing like I’ve said again and again!

So come join me in my recently created brand new masterclass where I talk all about this stuff. It is called how to teach your family intuitive eating masterclass.

It is an hour of long master class where I will be going even more.

On both that logistical side with intuitive eating, where I talk more about food sensitivities and picky eaters, and then more on the mental side of things.

Of how to approach this new journey. They will go on with their own ages and stages.

In a way that will make sense for them ranging from babies to teenagers.

It’ll come with a small workbook with action steps and journal prompts,

and you can access it easily with the online portal. So click this link here to join or below.

And if you liked this video,

Check out my previous video where I talk about me, Laura Cragun, and who I am!

It is a basic story about me, who I am, my story of how I’ve gotten to this point, and a few quirky things about me.

So thank you for watching today and hope to see you next time. Bye!

You may feel overwhelmed about where to even start with your health or are stuck in some pretty deep habits. As a follower of Christ, you want to have the energy to serve others more but you feel held back by your current mindset of diet culture and mental health.

But as a fellow woman in this faith that truly understands the inner turmoil and a certified health and life coach, I can safely say there is hope. There is a way to break free, and with my free Intuitive Eating Breakthrough Session, I can help. With our Master Healer, the Intuitive Eating principles, and eternal gospel doctrine, there is a way.